First, go right over and read the latest post written by my dear friend Kari Lynn Collins at One Funny Broad. Kari, is indeed one funny broad. Love her to pieces. But wait until you read her story about alligators and snakes. Oh, my goodness.

I have been afraid of Florida ever since that video on Facebook showed an alligator the size of a Chevy Silverado ambling along the green at a golf course near Sarasota. Then there was the toddler ripped from the beach at one of the Disney hotels by one of the resort’s “pet alligators.” Oh, and yesterday another Facebook video showed an alligator scaling a chain link fence.

Seriously? And just when I’d decided that maybe I value my life too much to ever set foot again in the Sunshine State, I learn from my buddy Kari that alligators are now hanging out in Lake Texoma, a huge man-made lake bordering Texas and Oklahoma where my friend Patsy has a weekend home (sell it, Patsy, SELL IT!) and other watery spots in Texas where they’ve never been before. Those sons of bitches are even walking down the street in a little town in Oklahoma. I am telling you, folks, alligators are taking over the country. And as I said to Kari, if they come to Ohio, I am moving to Ireland, Trump or no Trump.

My friend Sydney freaked me out last month, telling me there are rattlesnakes in Ohio. I have lived here a gazillion years and I did not know that. I don’t want to believe it. Or maybe they are just teeny, tiny ones that don’t really hurt. Regardless, I just want to tell you I am not putting up with living in the Snow Belt if the inconvenience doesn’t at least pay off in protecting me from the snakes and reptiles and bugs that I associate with far warmer climates. Those fuckers need to stay far south of the Mason-Dixon Line is all I have to say about that.

In the meantime, I’m afraid the northern critters are presenting their own brand of worry. If you’re a Facebook friend, you may have seen the photo of the diseased squirrel I posted about a week ago. The poor guy not only had lost half his hair to mange, but he also

was covered with revolting tumors that the nice lady at Lake Metroparks told me was Squirrel Pox. She said if I could catch him, I should put him out of his misery.

Me? Catch a squirrel? How does one even go about doing such a thing? There are so many squirrels in my neighborhood, I don’t know what I could devise for my particular trap to signal to the rest of them that it’s just for the sick squirrel. I picture myself catching and releasing dozens of squirrels, feeding half the squirrels in Willoughby, before finally catching the sick guy.

And can you picture the scenario if one of my dogs caught the diseased squirrel? As you can imagine, I’d be dragging them to the vet, screaming all the way, and shelling out hundreds of dollars for tests and shots and blood transfusions or whatever the hell it took to save The Boys from Squirrel Pox.

I haven’t seen the poxy squirrel in nearly a week, though that might be what died under the addition to my house. The pest control guys who installed the metal mesh barrier that failed to keep something from burrowing under there last weekend are coming to fix everything tomorrow. They’ll have a camera on a pole (a critter selfie stick?) to try to see what’s in there.

And – get this – I just saw another huge, fat squirrel on the fence next to my driveway and . . . I thought I saw a lump forming on his back. If Squirrel Pox is going to become a thing in this neighborhood, I might have to import a small squirrel-eating alligator to discourage them from coming to my yard.

This means that The Boys and I would have to move, at least until the squirrels are gone and it gets cold enough to freeze the alligator. 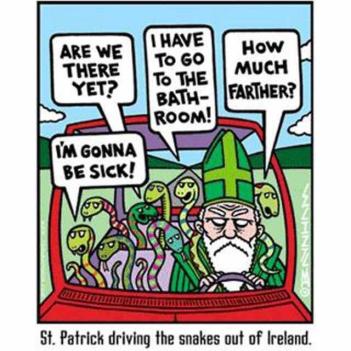 Between the critters and the politicians and all these folks walking around with a pistol in their pants or pocketbook, I just may have to rethink life in the USA. My son Chris is finally moving back here from Australia (another terrifying place critter-wise, but at least they don’t have guns) in August and it will be hard to explain why I have to leave just as he’s returning. I wonder if the University of Akron (where Chris will be teaching this fall – hurray!) might consider opening a branch campus in maybe Galway, or Cork?

I know Saint Patrick ran the snakes out of Ireland a long time ago and I’m pretty sure there aren’t any alligators there, either.

I’m not sure about the squirrel situation, however . . . .

2 thoughts on “Critters are creeping me out . . . of the country”