Today I decided to invite Rachel from Card Services to lunch. Although she calls and leaves messages for me several times a week, we hadn’t had the opportunity to meet yet. I thought it was about time. 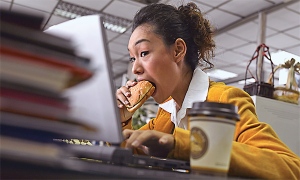 Now, I’m not stupid. I know she calls you and everyone else in America several times a week, as well. She’s busy. I get that. She told me she usually eats lunch at her desk, if she even has time to eat anything at all.

But I finally talked her into it by saying I was seriously considering getting a card with a lower rate and increasing my credit limit. I told her no yearly service fee would be too high for my consideration. I told her I have approximately $30,000 in credit card debt and I’d really like to transfer the balance to a new account. And, I told her I don’t give a fig about points or miles.

Rachel said, “So where do you want to meet for lunch?”

When I told my friend Brenda that Rachel agreed to come to lunch, she snorted coffee out her nose and then asked if she could join us. “Sure,” I said. I changed clothes and then dashed up to Michigan to pick up Brenda, and we met Rachel at the Cracker Barrel at the Maumee turnpike exit, just outside Toledo. We just barely made it in time, but Brenda and I did have a few minutes to shop for Yankee Candles and pecan logs before Rachel arrived. 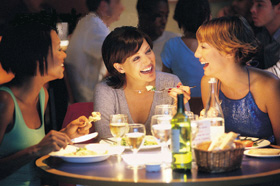 Laugh? I wish you could have heard us! I had more fun at that lunch than I’ve had in years, and that includes all the times I’ve peed my pants watching “Bridesmaids.” Rachel told us about some of the wackier experiences she’s had on the phone with potential cardholders and this time Brenda snorted Diet Coke out her nose. As a matter of fact, we were having so much fun talking about life and special offers at Card Services, Rachel decided to take the afternoon off to continue the fun with us – her new BFFs.

We’d each had several beers at the Starlight Lanes when we decided that next we’d treat ourselves to mani-pedi’s at a salon Rachel knew about. Unfortunately, that’s when things got a little strange. Brenda and I were happy with the basics; I chose a coral polish and Brenda went for the French manicure. But Rachel, who had had a couple of Jagermeister shots with her beers back at the bowling alley, decided she was up for a complete makeover. 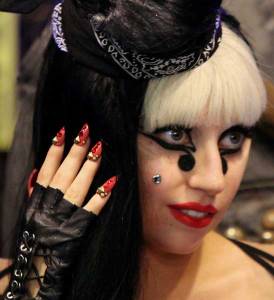 This is how that turned out. Oh, brother.

Brenda and I hightailed it out of the salon, leaving Rachel to her own devices. We are just a little afraid that she’s going to give us hell on the phone the next time she calls. And we didn’t even get a chance to open new accounts.

One thought on “Lunch with Rachel from Card Services”